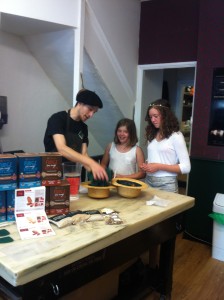 Do not EVER walk past one of these shops! Yes, the staff are a little ‘nuts’ but go in – we had an absolute ball!

The kids were very very excited about their trip to Bath – they were booked into The Fudge Kitchen to make some fudge from scratch. Yes, they had tasted Auntie Ann’s fudge before and it was certainly home-made and tasty but they were dying to try their hand at making their very own fudge.

On arrival we were greeted by the team who were a little ‘different’, in a good way, and very very nice – they were really good at their jobs and they obviously loved working at The Fudge Kitchen. The kids were presented with hats and an apron and we were given lots and lots of fudge to eat throughout the visit.

The huge pot in the shop window was where the fudge was ‘cooked’. The kids all had turns stirring and we were given a running commentary from the staff throughout. 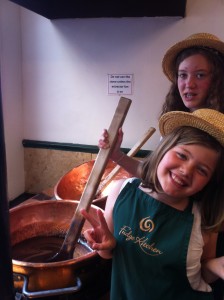 When it started to bubble, a large thermometer was used to ensure the fudge was at the correct temperature and the kids were encouraged to take these readings themselves and let them know when it was ready to be poured. This was a really good participatory workshop as they were able to literally do everything required, under instruction.

The pouring was rather scary and we declined this part and left this to the very skilled instructors! 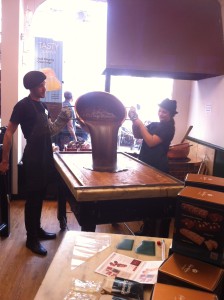 Now the fun bit – we had to wait until the fudge cooled just enough to allow a 7 second gap to be maintained when the fudge was parted – the kids each had turns parting the fudge and counting 7 seconds. They also were shown how they could ‘slap’ it and not make a dint – they had a lot of fun at this part – maybe too much fun… they were slapping like crazy and had attracted quite the crowd. People were gathering around the window and in the shop with all the laughter! 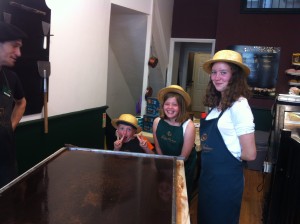 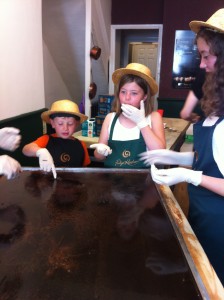 Next we were shown how to bring the fudge in from the edges and fold it onto itself. This required a bit of effort and concentration by the looks on the kids faces! 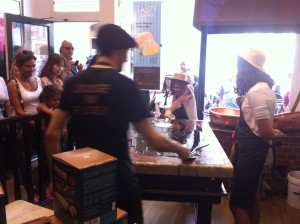 Even the youngest little monster managed this part and he loved being given the ‘responsibility’. 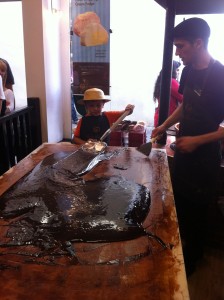 As the fudge cooled it was brought closer to the middle of the table and it slowly became more of a solid. 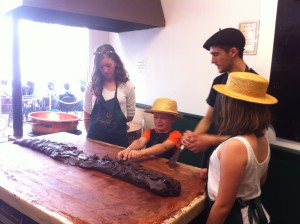 Ta da !! All ready to be cut and served – except I wasn’t sure they were serving this particular batch! We got to take rather a lot of it home. 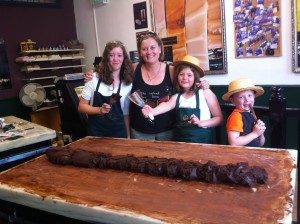 We finished with a little friendly competition. We were told the ideal weight of a slice of fudge and had a turn at cutting a slice and seeing whose slice was the closest to the correct weight! 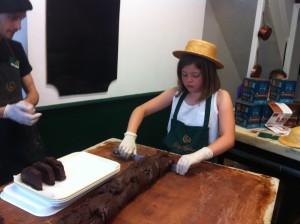 I would recommend this experience for both the young and the old. We all thoroughly enjoyed it and would definitely book this again in the future.

For further information and to book a workshop visit  www.fudgekitchen.co.uk