Every year, Fudge Kitchen selects a charity to support through fund-raising, sporting craziness, donations from dedicated sales and the eternally-embraced opportunity for FK staff to dress up in ridiculous costumes and trounce the other shops in bonkers competitions.

In each case, the chosen charity has touched the life of a Fudge Kitchen team member and is generally a smaller organisation, often overlooked in the charity crush, for whom every donation makes a tangible difference.
Past years have supported The Lily Foundation, Ogwen Valley Mountain Rescue Organisation and Breast Cancer Now. And have seen FK staff cycling across India, Cambodia and Vietnam, a kayaking v. walking team race from Windsor to Cambridge, some incredible themed fudge flavours – Bara Brith, for one – and the odd Marathon, fuelled by fudge of course.

This year, it’s the turn of Body and Soul, a London-based charity dedicated

to supporting young people with mental health issues and, in particular, those with a suicidal history. 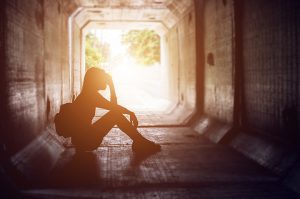 the leading cause of death of young people in the UK, yet two-thirds of young people who die by suicide are not in contact with mental health services before their suicide attempt. Fudge Kitchen’s support will help us reach more young people at risk of death by suicide, providing a safe and loving community and therapeutic support to help young people find a sense of purpose, hope and love.” 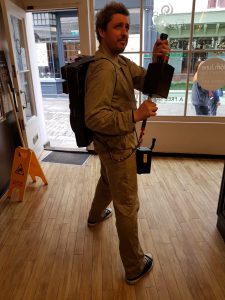 When better to kick start a year of supporting such vital work than on National Fudge Day on June 16th, which also happened to fall on Fathers’ Day. Such a bottleneck of events was all our seven shops needed to blow up the balloons and crack open the dress-up box, armed with the theme of ‘Childhood Heroes’, which variously included a Harry Potter, a Minnie Mouse, Captain America and a Ghostbuster (go figure!) 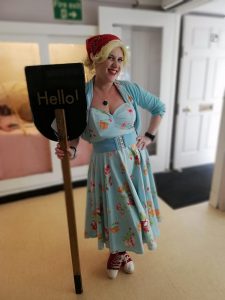 Each was also given one pedometer to clock up as many steps as possible, shared across their team, even the odd game customer. And each were set the task of selling the most Fathers’ Day selection boxes, with £1 from each sale going to Body & Soul.

And the winner is …
They are a competitive bunch in the Fudge Kitchen shop, which works well when there’s money to raise. And raise they did … with a fantastic total of £400 donated through a combination of fudge sales and winners’ prizes. 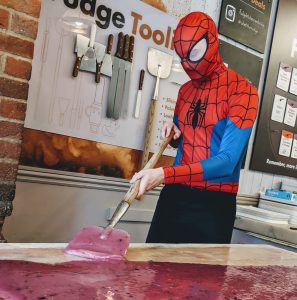 Team Canterbury won the step competition, clocking up a whacking 20,000
steps on their pedometer. In total, the seven shops clocked up 70,000 steps. That’s around 35 miles worth of fudgemaking. And the best costume went to Rayman shop for his magnificent turn as a friendly, neighbourhood, fudging-loafing Spiderman.

Watch this space …
The next year will see us variously dedicating events and sales to Body & Soul, supporting their lifesaving work and building awareness of both them and Mental Health issues, because every penny will make a difference …

£500 will fund a year of therapeutic yoga classes for their members
£2,500 gives 20 young people access to 1:1 counselling and psychotherapy
£5,000 will fund the Head of Suicide Programme to provide 1:1 support helping young people to pursue their dreams and goals, whether employment or educational 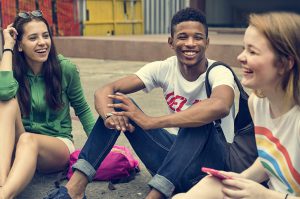 Next stop the Asics 10k on 21st July, where a plucky team of three FK-ers, Oxford manager Toby, Bath manager Ian, Windsor manager Matt and Marketing Manager, Mollie, will be lacing on their trainers and running round London for Body & Soul. If you’d like to sponsor this impressive venture and bring some hope and happiness to a young person in their darkest hour, please drop by the Just Giving page

Lisa Jones
http://www.dandelionpr.co.uk
Specialising in the Food and Drink industry, creative thinking and bags of energy and passion.
Previous Post It’s the most wonderful time for Fudge… Next Post We won! Again! Best Ambient Manufacturer of the Year award at the 2020 Food Manufacture Excellence Awards …