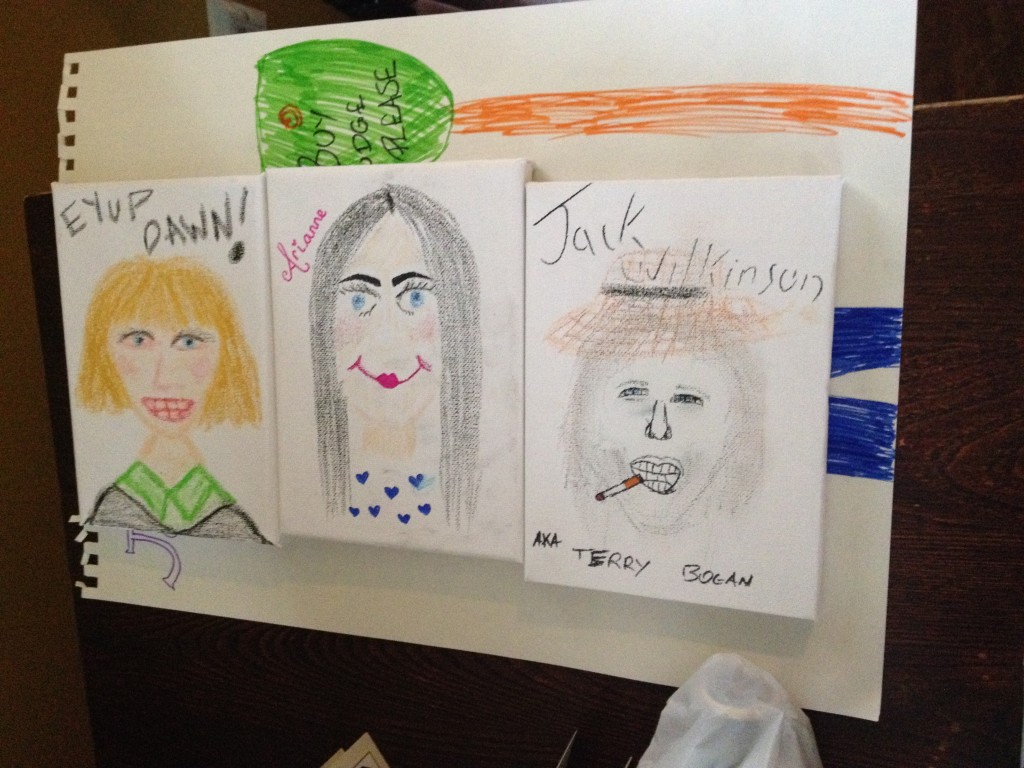 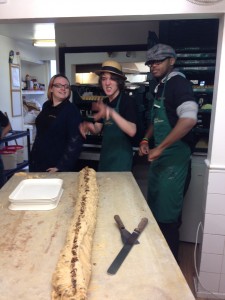 Every year for the last 26 years, like the gathering of the clans, the elite of the nearly 60 strong, nationwide Fudge Kitchen family have congregated to compete in the annual Fudge Kitchen Fudgympics. Nine teams, 32 fudgers, eight shops, nine events, one crazy day .. no prisoners taken!

Last week, the host was Windsor’s Fudge Kitchen: an ancient, wonky little shop, quaking at the foot of Windsor castle’s immense granite edifice. Managed by Matt (and his moustache), customers are regularly treated to bursts of bluegrass by him and his ukele-wielding sidekick Sam (both pictured in a riot of millinery). 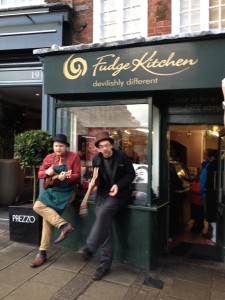 The Windsor Fudge Kitchen: host of the 2014 Fudgympics ..

“It is these fabulous characters that define Fudge Kitchen,” says MD and matriarch, Sian Holt, “their energy, their quirkiness and their loyalty. We have team members who have been with us for 25 years and this annual get together is about celebrating the united bunch that forms the big personality of Fudge Kitchen. It’s about thanking everyone for their individual and energetic contribution and commitment to the company; and for giving it such colour.” 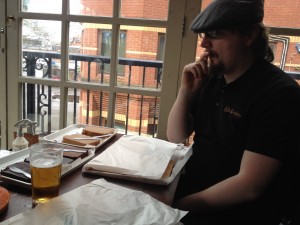 Ray is flummoxed … no, that’s lager!

And what better way to do so than by forcing them to fold gift boxes that would tax an origami artist, weigh ingredients without scales, paint their managers and compose odes to them and be judged on creating the perfect loaf of fudge (aesthetically, texturally and taste-fully), whilst being entertaining, nay nuts.

Missing only the Danny Boyle opener, this was the day that many had spent their careers working up to, a day that would sort the Fudgetieres from the frauds, would test skills to the limit, witness tears and triumphs and span a Fudgympic Village of specially designated venues – from the Fudge Kitchen shop to Nando’s to Wetherspoons. 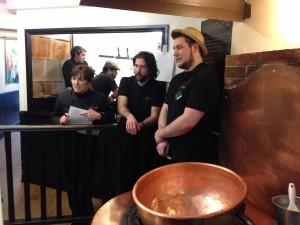 Patch and Sian judge the proceedings

Pitting the eight Fudge Kitchen shops and Dusty, the Aylesham production team, against each other, events ranged from estimating weights to blind testing flavours to “skanking” products in return for fudge from fellow Windsor retailers. A special mention to the Canterbury team here, whose blasphemous box of mass-produced, tourist fudge was a stroke of genius; and to the Windsor team, whose shamelessly underhand bribe, in the form of a bottle of whiskey, was only to be encouraged. 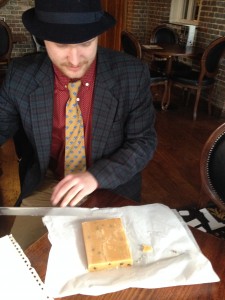 Sam limbers up to cut a precise 175g square without scales

All eyes, however, were ultimately on the fudge equivalent of the men’s 100m: the coveted whipping cream fudge making trial, showcasing the traditional, fabulously theatrical method of “creaming and loafing” on a 5ft marble top to achieve the optimum texture as the fudge cools. A technique which genuinely takes years to perfect and is rarely helped by the likes of Edinburgh saboteur, Will, repeatedly heckling “Is it cheese?” from the gallery; an homage to the most frequently, yet inexplicably asked question posed by tourists, particularly when directed at Chocolate Rum Brownie.

“Slow and steady wins the race,” cajoled Patch Hyde (co-judge, Head of Retail Operations and stand-up comedian moonlighter), as emotions (and beer levels) ran high across Cambridge’s Maple and Walnut, “… unless it’s a sprint, of course.”

“You’re all a currant short of a sticky bun,” a bemused Californian tourist, who had stumbled onto the proceedings, concluded. Now there’s a fudge recipe idea. 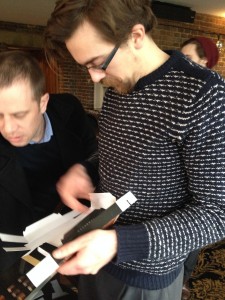 But who won? I hear you pant excitedly.

In a glittering award ceremony at Lebanese Nights that evening, that owed much to the Oscars (a couple of guys working the bar that night), much teary thanking of parents and agents, gritted congratulatory smiles (and gratifyingly no wardrobe malfunctions) accompanied presentations to:

Cambridge: Shop of the Year

“Sincere congratulations and thanks to them all. It was certainly a day full of energy”, concluded Sian wearily, ”.. and beer.”

Lisa Jones
http://www.dandelionpr.co.uk
Specialising in the Food and Drink industry, creative thinking and bags of energy and passion.
Previous Post The Future is Fudge … Next Post Kentish cookies and confectionary combo …!