Fudge Kitchen has always been as much about our quirky staff as our quality confectionery, with every one of our 80 plus fudgeteers hand picked for having that extra something that makes every visit to a Fudge Kitchen shop an entertaining, welcoming, engaging, truly memorable, slightly bonkers one. Retail theatre, we call it.

As such, the Fudge Kitchen family (which is very much as we all see it) is a fabulously motley bunch of mavericks; mainly moonlighting in some other crazy, creative capacity – from stand up comedians to blue grass bands – and generally great hat-wearers.

“A weird sugary asylum full of highly functioning maniacs,” explains Robin Sherriff of the Edinburgh shop. “A bastion of fudge obsessives who band together to weird out customers, disgrace ourselves at the pub and generally have a grand old time.” elaborates Vicki Shadbolt from the Bath shop, one such maniac evidently.

Nevertheless …. we are inordinately proud of our staff and they, it would seem, feel the same way. Some members of the fudge fold have been with us for over 20 years; and how many workplaces inspire such dedication, how many products such passion, how many employers such devotion as to be indelibly inked on two sets of ribs and an arm …? 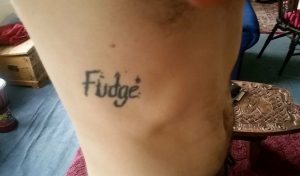 Patch says it as it is …

First up is regional sales manager Patch Hyde, clearly a man who calls a spade a spade, and has the word “Fudge’ concisely tattoo-ed on his ribs, “It’s the most painful place,” he ‘reasons’, “and it’s important to remember the pain.”

Meanwhile, the aptly named Sam Nutt, of our Windsor shop, returned from a holiday with the obligatory hangover and ‘Make Fudge Not War’ tattoo-ed up his arm. “It seemed like a good idea at the time, and it was,” says Nutt. 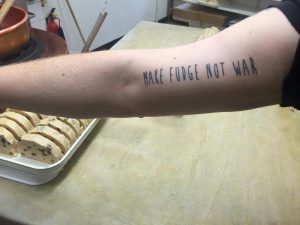 Initially, he intended to get the design done in the handwriting of his manager, Matt Young, but left his note at the airport bar that he had been lengthily propping up. Luckily for him, the artist thought this hilarious and tattooed our Sam for free in his own handwriting.

The latest elaborate demonstration of caramelized commitment comes from the aforementioned Robin Sherriff. A confectionery coat of arms, it features copper cauldron, crossed creamers, the synonymous hat and – once again to the point: fudge folk don’t mince their words – a motto which reads simply ‘Fudge’. “It looks cool and also it is totally badass because it hurt tons.” Sheriff unfathomably explains of his rib-art. 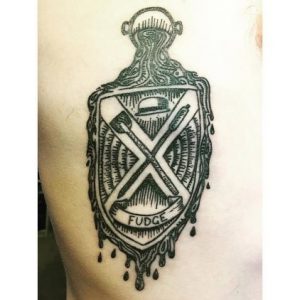 The fudgeteers coat of arms …

Designed by Jessie, an ex-fudge-maker trained by Sherriff, it is an heraldic homage to authentic fudge-making, the Fudge Kitchen way. “I think [fudge-making] is a really unique thing to do,” he continues. “It makes people happy and the world seem better in a small, silly way.”

What an extraordinary testament to a skilled set of artisans’ pride in their traditional craft. Either that or a quite barking bunch that need a reminder of what they are supposed to be doing that day permanently on their person.